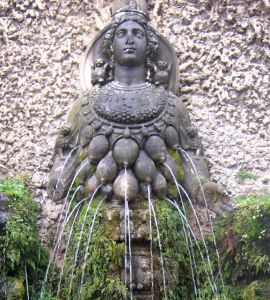 Diana of Ephesus, the symbol of abundance, graces the garden at the Villa d’Este.

The Fountain of Nature – Symbol of Abundance

Symbolizing the unstoppable flow of life, this statue by Giglio della Vellita, is not your standard nymph in the garden.  This Diana is the universal mother, supplying substance to all, and evidence of her influence occurs in the  7th century BC.  Her sacred temple at Ephesus, a Greek city built in the 10th century BC and now in modern Turkey, was rebuilt many times.  Under the Greeks, it was the Temple of Artemis (Greek name for the goddess the Romans named Diana), one of the Seven Wonders of the Ancient World.  A fascination with Greek and Roman roots inspired Renaissance sculptors and we can thank Giglio for this link between our world, the Renaissance and the ancients.  Come see Diana, nee Artemis, with The Quiet Garden in Italy, Feb. 15 -22, 2015.        TheQuietGarden.com

This site uses Akismet to reduce spam. Learn how your comment data is processed.

An Email Taste of The Quiet Garden!

Your contact information is always safe with us and will never be shared. Easy to unsubscribe.